The sensor is a high-impedance, constant-current source over the temperature range of –55°C to 150°C. It has a nominal current sensitivity of 1 µA/Kelvin.

The transducer gives reading in mV/°C. The signal is conditioned and subtracted from a reference signal of 273 mV and the output of the circuit can be read directly in degree Celsius on the display. The sensor gives 1 µA current per degree rise in Kelvin, where 1°K=273+t. At room temperature (25°C), 1°K becomes 273+25=298. So the sensor outputs a current of 298 µA. 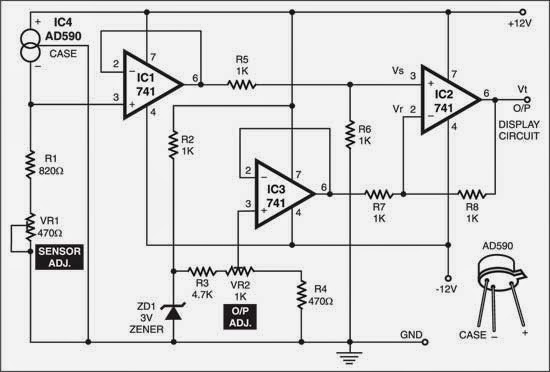 The current-to-voltage converter has a 1k resistor (R5). As the current is 298 µA, we get 298 µA x 1 kilo-ohm=298 mV. Now according to our design, we set a reference value of voltage that is to be compared with 273 mV. The voltages are fed to the buffer amplifiers to prevent loading of the source.


The circuit consists of three operational amplifiers (IC1 through IC3). IC1 and IC3 are used as voltage followers for the sensor output and the reference voltage, respectively. IC2 is used as a subtract er. The resultant of the voltages, i.e. Vs–Vr=Vt, is displayed on the LCD or on the multimeter.

For any rise in temperature, the value of sensor voltage changes and then the resultant is found by subtracting the two voltages by IC2. Thus continuous monitoring of the temperature takes place.