Most of the circuits for multi-level indication/control of water in tanks employ a bunch of wires running between the circuit and the overhead tank, which accounts for almost half the cost of the entire project. Here is an intelligent scanned water-level indicator-cum-pump controller circuit (Fig. 1) that utilises just four wires to the overhead tank to indicate nine different levels. The connection arrangement for the overhead tank (OHT) and the underground tank (UGT) is shown in Fig. 2. Two wires from the circuit in Fig. 1 run to the underground/ground-level tank (to output line K and return line J, respectively) to check the availability of water in the tank before operating the pump, thereby guarding the pump against the damage due to dry running. 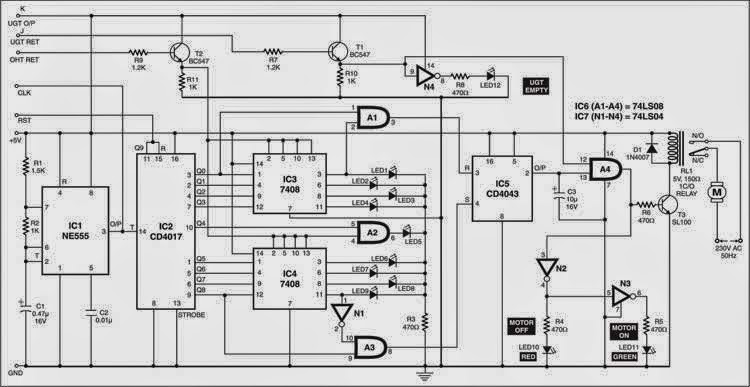 Suppose at a given time, there is some specific water level in the OHT. The clock from NE555 keeps advancing the Q outputs of IC2 and IC8 starting from Q0. Only when the Q output of IC8 corresponding to the first (starting from top) water-submerged probe goes high, the OHT RET line goes high through water in the OHT. This causes pins 2, 5, 10, and 13 of quad AND gate ICs (IC3 and IC4) as well as one input of AND gate A2 to go high via emitter-follower transistor T2. The identical Q output of IC2 goes high simultaneously to light up the corresponding LED (LED1 through LED9) to indicate that particular level. 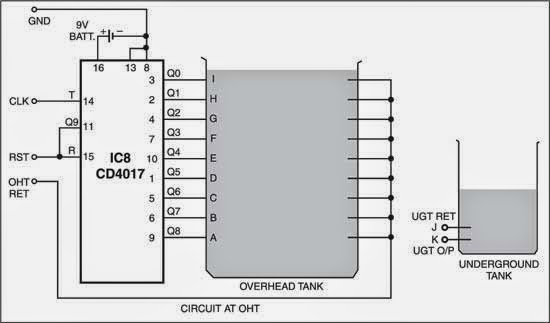 Similarly, upon reception of the next clock, the next lower level is indicated by the next LED, and so on. Scanning at a very high speed gives the illusion that all LEDs up to the one corresponding to the actual level in the OHT are continuously lit. This is due to the persistence of vision.

When the water level in the OHT is high enough to light up LED1, both the inputs of AND gate A1 also go high simultaneously. As a result, the output of AND gate A1 goes high to reset the flip-flop IC (IC5). The output pin 2 of IC5 goes low to DE-energise relay RL1. Now when the water level in the OHT goes low such that LEDs 1 through 9 are off, the output of AND gate A3 goes high to set RS flip-flop (IC5), thereby making its output pin 2 high. Only when there is enough water in the UGT, pin 12 of AND gate A4 will be at logic 1 to provide forward bias to relay driver transistor SL100 (T3) to energies the relay to switch on the pump motor. The motor will switch off only when the water level reaches the uppermost level or when the UGT gets empty. LED10 through LED12 indicate ‘motor off’, ‘motor on’, and ‘UGT empty’, respectively. IC8 is powered separately, using a 9V battery that lasts long enough.